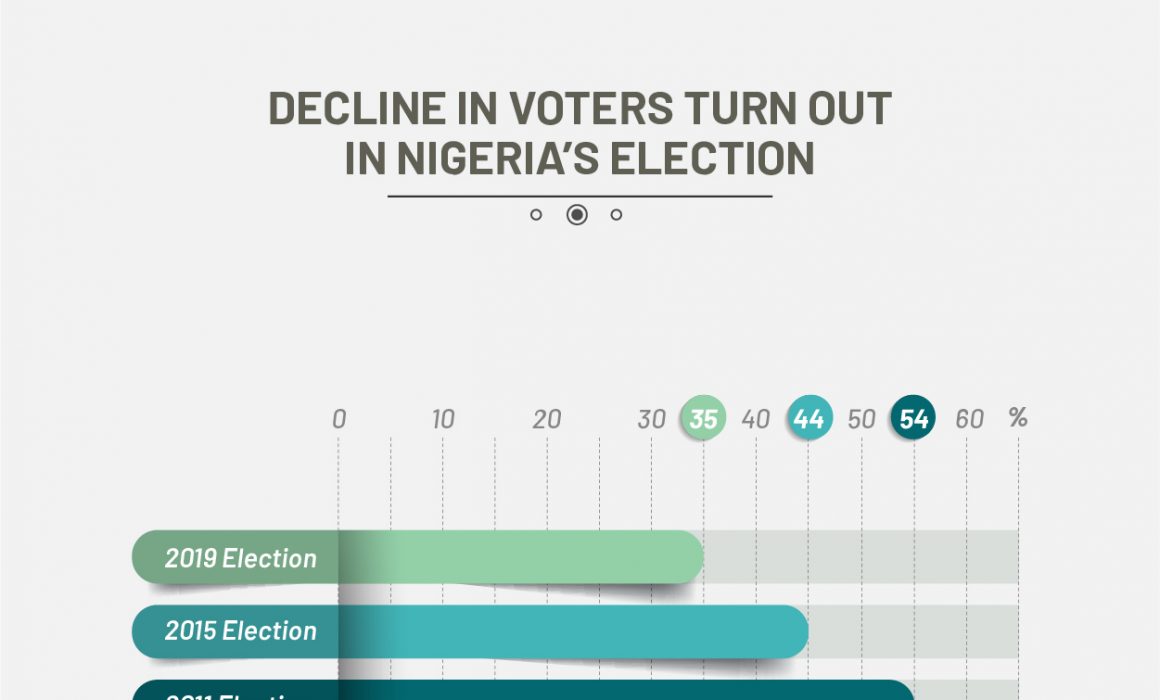 With Nigeria’s general elections just two years away, the country’s electoral commission, the Independent National Electoral Commission (INEC) has started preparations. In less than 48 hours after the resumption of online Continuous Voter Registration (CVR), the Independent National Electoral Commission (INEC) disclosed that it has received 92,845 online applications nationwide. Further, they added that of the 92,845 applications received, 63,437 were for new voter pre-registration, while 997 of the applications were requests for uncollected Permanent Voter Cards (PVCs).

This record is significant because the number of voters’ turnout in any election is determined by the number of registered voters. Indeed, statistics show that the voter turnout for Nigerian presidential elections has been dropping since 2003.

Another important insight we see from the figures presented above is that on one hand, although voters registration influences voters’ participation yet on the other hand, the number of registered voters does not always equal the number of voters that participate in elections. Citizens, since they occupy the highest office of the land, need to be educated on the power of their office and most especially the need for them to ensure that they exercise their civic rights to the fullest.

Implementing a process which requires access to internet for voters’ registration easily excludes people in areas without internet. Consideration needs to be given to the 100+ million Nigerians that although they have mobile phones, yet, many lack access to internet. One recommended option to manage this is by augmenting the process to include USSD feature, hereby enabling people to register via dialling a short code.

It has been recorded that Nigeria has over 500 languages, with 4 dominant languages – Yoruba, English, Igbo, Hausa and Pidgin/English. Public communication, as a standard principle, should reflect this diversity. The country’s electoral commission, the Independent National Electoral Commission (INEC) and Civil Society need to produce visual and audio content in different languages.

Continuous community engagement cannot be negotiated no matter how innovative the process introduced is. Effective community engagement is like a fire when it keeps burning, it continues to expand and impact different places. It literally starts with one person understanding the importance and process of voters registration; discussing with members of the family; members of the family taking that message to their various community and it continues to expand.

This site uses Akismet to reduce spam. Learn how your comment data is processed.