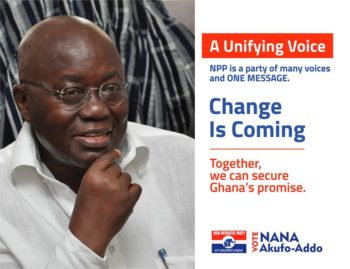 The meetings usually started at about 4:00 AM and would go on till about six or seven in the morning, discussing and recalibrating strategy, content and studying the impact of the work StateCraft Inc was deploying in Ghana. It was a near daily occurrence for much of the time we spent in Accra; nearly four of the five-and-a-half months our team of two was in Ghana. We liaised with the design team based in Nigeria, going back and forth on layout and design, updating StateCraft CEO Adebola Williams weekly on the nose-to-the-grindstone work we were executing for the Nana Addo Dankwa Akufo-Addo presidential campaign.

This was the team’s second political campaign working together and we had already developed a well-established rhythm of execution. Remi Ogunkayo, Adebola and myself were responsible for various parts of strategy, co-ordination, content creation and deployment, and Fourth Canvas delivered the design and layout.

We will miss—sorely—the invaluable time we spent on the campaign trail, providing the chance to observe and deice what truly resonated with the people. Whether it was at the market, out in the regions or at the impressive Greater Accra rally, the joy and enthusiasm was palpable in the crowds that gathered to see Nana Akufo-Addo each and every time, rolling the hands and chanting with joy “ye si sem!” (change is coming) as the cars drove past.

Our last month was spent in the crucible—right in the thick of the campaign. Streamlining content for effectiveness meant that we delved into team conversations that were intense and rewarding. Nana Akufo-Addo had a lot to say; his mind and those of his amazing, dedicated communication team were constantly working. Our job was not just to be his Greek chorus, but to also tactically solidify and reinforce his message through the line, to every Ghanaian voter we could reach.

Constructing effective candidate communication is a delicate balance of content, message, and delivery, all working in tandem to convince a wide and varied audience that a candidate is the best possible option to make life better for just one person: every single voter. Not only do you have to drive the conversation and talk to the people in the street, you have to capture the zeitgeist of the citizenry; take the true pulse of the people and connect it with the candidate’s message. The goal is to get beyond the surface, to speak directly to the people, speak to their concerns, hopes, and their future.

Every piece of content created and delivered by StateCraft was an exercise in forging a bond with the public, to ensure that the people understood the message that was being conveyed, no matter the medium—digital media, print or video.

Over the last six months our campaign focused on that ruthlessly—building out a core message that connected, while also setting the record straight on the nation’s status quo and addressed the very real issues that Ghanaians were most concerned about. Whether we were analysing the power of the message of unity or tackling the cost of safe, clean water, at every step StateCraft worked with the campaign to deliver with clarity and vision. And on 9 December, 2016 it all came to fruition—Nana Akufo-Addo was named President-elect of the Republic of Ghana, eighteen years after he launched his first presidential bid.

Politics remains, at its core, the art of persuasion. Mobilisation is crucial, as are robust data operations in today’s modern campaigning. But, at the centre, messaging is the lifeblood of successful missions. The crafting and delivery of a vision for the future that citizens can believe, and run with.

Akufo-Addo won because he had that vision, and his message of change was authentic, resonant and desperately needed. We are grateful to have been called upon to help give that message wings.

–Orekoya was Senior Manager on the Akufo-Addo campaign. She previously worked with the Muhammadu Buhari campaign in Nigeria.